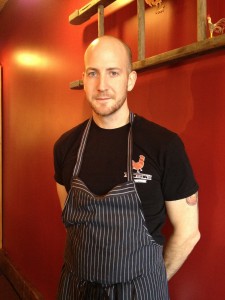 Trevor Bird was born and raised in Montreal. He opened his first restaurant Fable Kitchen in Kitsilano in May 2012. He was featured on Top Chef Canada 2nd season winning the 2nd spot on Top Chef. Prior to this, he was the chef de partie at the Shangri-La hotel in Vancouver. He also worked as a chef at Truffert and as a sous chef at Restaurant Garcon, both in Montreal. Trevor has a degree in culinary management from Algonquin College in Ottawa. A restless spirit, Trevor has spent equal parts of his career on the east and west coasts of Canada. His constant searching even led to a stint in Peru to cook for an NGO.

Opening a restaurant, what challenges did you expect to have?

When I first purchased the restaurant from Robert Belcham, he told me to be ready for the ride. I never thought it would be this hard and an emotional roller coaster since day 1. Being as busy as I am now, you know how to handle yourself. Juggling and being a business owner and to see what is important and knowing what to do is key. My partners and I get along so well, we have the perfect partnership. 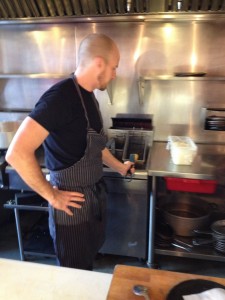 Over extending myself, from when I was a young cook I saw my mentor be involved in the community and he did everything – I aspire to that.

I say yes to everything and I have to know how to manage my life.

What did you expect your restaurant to be like after opening?

When I opened the restaurant I never expected the success we are having now. 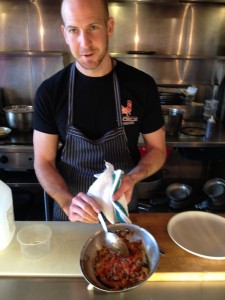 Tell me about your tattoo on your left arm?

Well the tattoo is all heirloom tomatoes and my slicer. When I was 26 years old I got this tattoo, only took me 6 years to get it, when I was 20 I was growing my own tomatoes at an organic farm, I was harvesting, it was my first look at farming on a horse powered farm. That was what started the farm to table movement for me. My Mac slicer was my very 1st knife and it felt so good. The tattoo represents my style of cooking, doesn’t over complicate things, stays true to what I believe. 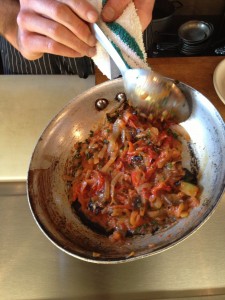 How did you get into canning and preserving?

I always liked to see vegetables and fruits in preserves in other restaurants. I like grass roots cooking, from butchery to baking bread – Fundamental Cuisine – the best that we can do with the equipment we have.

What are you canning in the restaurant?

We make a few to use as condiments in our dishes and we sell them to the public in our restaurant on request:

How do you find passionate chefs who believe in your vision?

Start with the vision of Fable, the less you get paid, the more you work, the more you learn, which will benefit you in your future. It teaches work ethic, how to handle your product from beginning to end.

You say I am going to buckle down for a couple of years, live by the skin of my teeth or you go work in a hotel where they pay you too much. It will kill your perspective of quality food. You didn’t do the prep, it is about handling your product from beginning to end. You are going to want to treat that which says a lot. How to deal with food from beginning to end. You have to be a workaholic. 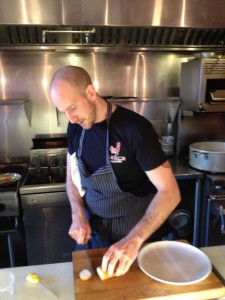 What is it like to have an open kitchen?

Personally I love it, I am a social person, not shy, it teaches cooks to keep me cool. Its almost like a show for me. Food is my lift, I love talking about it, anything you want to know.

How do you hire Chefs?

I will never hire based on a resume. School will never teach you work ethic, one of my chefs I hired never went to cooking school. I helped him get placed in another kitchen for 3 months prior to our opening Fable, then I hired him and he has been here since day 1.

Have you ever fired a chef?

No – it is about mentoring chefs, they work so hard at what they do.

What are your favourite restaurants outside of the one you own? 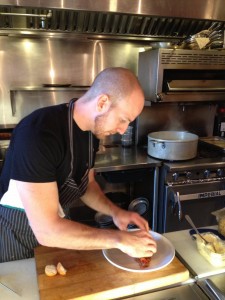 How different would it have been for you if you didn’t do the tv show?

I think it would have taken a lot longer than it has, at least 3 years longer.

What is it about a chef owner restaurant that makes you successful?

I don’t know, it has been a lot of work, but I have no idea what I did to make it happen. I wish I could tell you.

I started cooking at 15 years old. I was interested in being healthy. I wanted to be a Personal Trainer or a Chef and it unfolded into being a chef and fitness as a hobby. 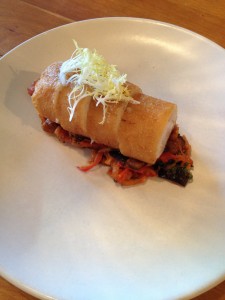 I needed a chicken dish for the menu. I used to do the same dish with rabbit, I like to wrap things in saran wrap, I know it isn’t good for the enviroment but it makes nice food.

What is the art of tasting while cooking?

Win a Tasting Experience at BC Home & Garden Show Feb 23

Brunch with Josh Epstein at Cibo