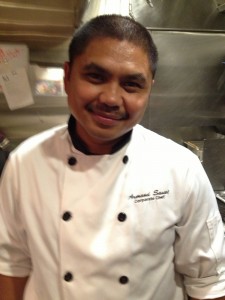 At a young boy my parents had a catering business and restaurant. I grew up in the restaurant working in the kitchen peeling vegetables at 6 years old. Years later I worked at Wendy’s, Cactus Club and Earls. Went on to VCC in the culinary program then dropped out and worked as a chef on the dinner cruise boats in the harbour when I was 21 years old. Worked for the Umberto group of restaurants for a few years. I then worked for the Sequoia group at Seasons in the Park as the 1st cook. At 23 years old I took a break from the culinary world and became a long haul truck driver cause I wanted to travel and see what else was out there. My job was to haul produce back and forth to California. After 4 years, I returned to the kitchen and worked at Ballentyne’s, then I moved on to Section 3 and became the Executive Chef, then left and went to Gotham Steakhouse as the Sous Chef, worked there for 3-4 years, I then moved over to work within the Aisenstat’s company, under the corporate umbrella doing the opening for their new restaurant, I then moved to Winnipeg where I was for 2 years to open Hy’s Winnipeg. Afterwards I was promoted to Assistant Corporate Chef when I moved back to Vancouver to open the Shore Club, I then took over Hy’s in Whistler. I was then promoted to Corporate Chef for Hy’s, Gotham Steakhouse and the Shore Club rotating every day. Since 2011 I have been the Corporate Chef of their Ki Japanese Restaurants and Shore Club’s across Canada. 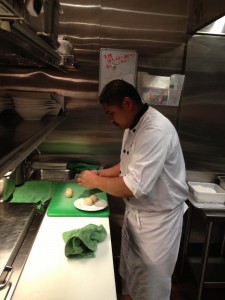 Tell me about the Cheese Toast at Hy’s

The Hy’s Winnipeg recipe was different than the others, while I was there I tried to change their recipe and the city reacted in a negative way. A newspaper wrote an article about our changing the cheese toast recipe as it was a big deal. Complaint letters from customers were coming in and piling up. I then had to take control of the situation and had no choice but to revert back to their “Winnipeg” recipe to please everyone. 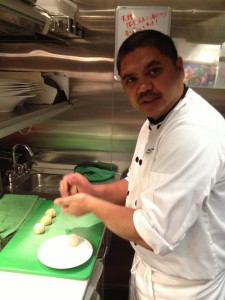 What is your job role now?

As the Corporate Chef I help and ensure the chefs are doing their jobs and help with events. About 40% of my job is cooking and the rest of the time I am doing paperwork, forecasting and constantly researching new menus and dishes and sourcing suppliers. 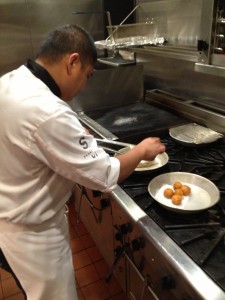 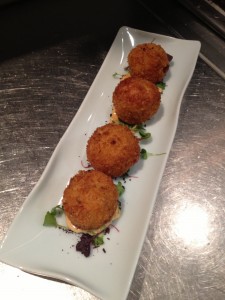 A play off a crab cake and it’s great in the summer or winter. 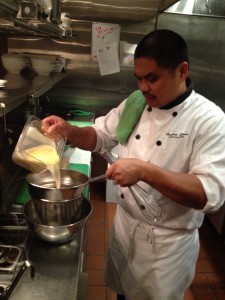 Tell me about one of your experiences in Winnipeg

Winnipeg has a huge Southern Italian Community. I used to eat at my Sous Chef family’s every Sunday eating Italian. I learned more about Italian food from this experience than I ever had. 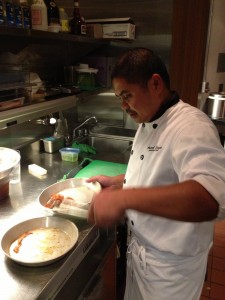 What challenges you as a Corporate Chef?

Keeping our local markets happy but maintain balance of consistency and it is quite challenging. 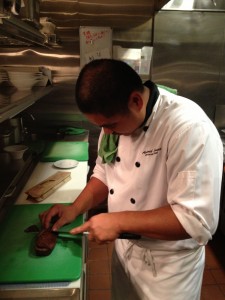 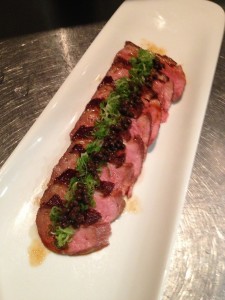 A play of Peking duck, I woke up this morning and I was craving Peking duck, went to Granville Island Market and bought the duck there to make this dish for you. 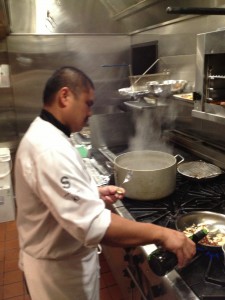 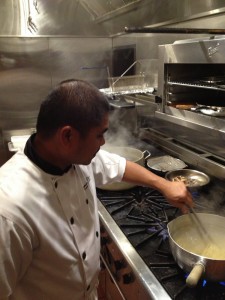 How do you focus and work with two totally different restaurant concepts?

It is all about technique, and quality. I read like crazy, experiences, there are differences, such as handling fish, I help out and ensure 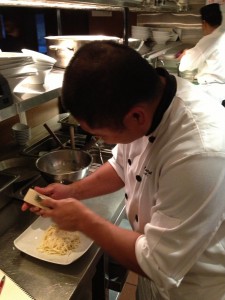 What challenges have you had working with suppliers nationally?

Consistency. I have to see that the product’s are available nationwide if our dishes are on the main menu across the country. 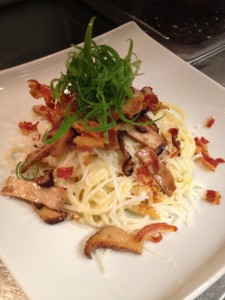 I woke up this morning and it was cold. I wanted to show the experience of the dish and layering the flavours.

Lunch with Emily Molnar at The Fish Shack