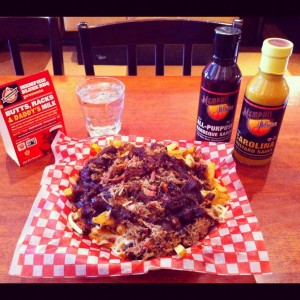 Known for their authentic Southern BBQ. Slow food, served quickly! Pulled Pork, Brisket, Ribs, Sausage, Catfish, Smoked Chicken, and all your favourite sides!  Memphis Blues was launched by George Siu and Park Heffelfinger in Vancouver in September 2001, Memphis Blues Barbeque House celebrated its 11th anniversary in 2012, Memphis Blues also boasts one of the most extensive Bourbon selections in the city!

The boys have also released a best-selling cookbook,  Memphis Blues Barbeque House – Bringin’ Southern BBQ Home (Memphis Blues, 2008), that has just been re-issued and available at all six stores, as well as a series of unique Memphis Blues Rubs and Sauces. They are set to open new restaurants this year in BC, Alberta, Saskatchewan, and Manitoba.

1 of each of the new rubs and sauces:

One winner will be randomly selected from all submissions, contest closes at 4pm on August 28th.

This is Contest #2 August 28th, part of our End of Summer Giveaway Madness

1)    Enter the Memphis Blues BBQ Eating Experience – submit a comment below, what was your meat of choice on the grill this summer?

RT to Enter for a chance to Win a @MemphisBBQHQ BBQ Eating Experience in @Vanfoodster End of Summer Giveway Madness http://bit.ly/RSSDJv

Fine Print: You must enter your full name and include your Twitter address if you have one, and register with your email address when entering the contest. * By entering your email address you will automatically become a subscriber to Vancouver Foodster to receive possible contests, specials or newsletters.

Winner will be drawn by Random.org

WIN a Chicken & Waffles Brunch for 4