For my twelfth brunch in this series, I was joined by Musician Bif Naked at Edible Canada at the Market in Vancouver talking about Music, being Vegan and more! 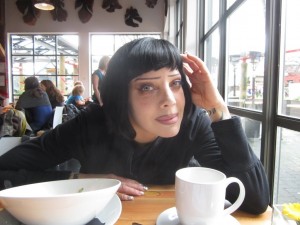 Her musical career is vast, prior to her solo career, Bif played with punk bands Gorilla Gorilla and Chrome Dog. She has toured Europe, the United States, and Canada as a headlining act, and has performed on bills with Snoop Dogg, Billy Idol, Dido, Sarah McLachlan, Sheryl Crow, Chrissie Hynde, the Foo Fighters, the Cult and many more. She recorded a version of “I Saw Mommy Kissing Santa Claus” for the MTV: TRL Christmas CD. She was also featured on the Ready to Rumble soundtrack with a cover of Twisted Sister’s “We’re Not Gonna Take It”, the Celebrity Deathmatch soundtrack with “Vampire”, and Buffy the Vampire Slayer’s soundtrack with “Lucky”. Solo albums include Bif Naked, a self-titled album, Purge, and I Bificus. In 2005, after narrowing it down from over 50 songs, she released Superbeautifulmonster with 13 tracks. The Promise was released in 2009 and was dedicated to her fans. Sick, Bluejay, You’ll Never Know were mixed by Juno Award winner Mike Fraser. She has made appearances in music videos for The Offspring’s “The Kids Aren’t Alright”, Moist’s “Believe Me” and “Silver”, Liveonrelease’s “Get with it” and Simple Plan’s “Save You” near the end along with other people (such as Sharon Osborne and René Angélil) who have been treated for cancer. In 2011, she recorded a duet with Vancouver yogi and Nettwerk recording artist Will Blunderfield for the international version of his album Hallelujah.

She has had an extensive acting career as well, from being on the The Chris Isaak Show in 2000, to becoming the first host of the CBC Television series ZeD in 2002. In 2003 she appeared as a judge of a fictitious reality show in the TV series Cold Squad. In 2007 she narrated the chronicles of her and her spouse’s life in Bodog’s web reality show “Bif Naked Bride” up to the wedding finale.

I have been singing professionally since I was 18, I dropped out of school to tour with “Gorilla Gorilla” and opened for “DOA”.

What came first being a Poet, Spoken Word or Music?

Poetry came first, been writing since I could read, my parents are both academics. I was obsessed with the writing of Anais Nin. Spoken Word came on at the same time then music. In 1996, I put out a spoken word record.

Never wanted to, still don’t. For 14 years I was a ballerina, I thought I would have a dance career. Fell into theatre, then ended up on tour for 20 years.

It is malleable, every song is different, and a hodge podge of genres and I am lucky to be able to do it.

A little bit as I have, and trends have. I am a lyrist more than a music writer. My musicians present me with rites first. 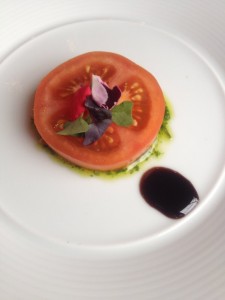 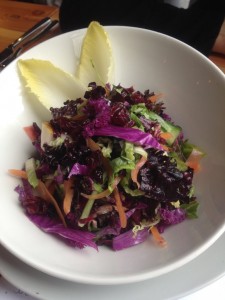 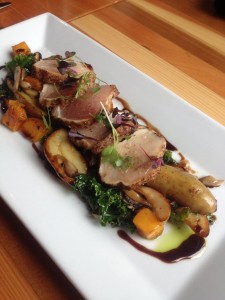 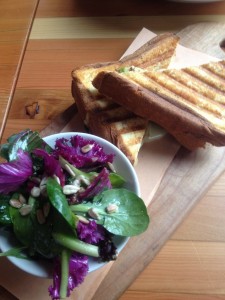 Bif and Richard were both served an Amuse Buche tomato to whet our appetites, Bif had the Harvest Salad ($11) with Okanagan pears, sundried cranberries and local greens. Richard had the Albacore Tuna Salad ($14) with fingerling potatoes, kale, spinach and wild mushrooms and then had a Grilled Cheese Sandwich ($10) with brioche, Farmhouse brie, smoked cheddar, Dundarave olive jam and Okanagan Apple.

Zucchini – I could eat it 3 times a day, forever.

My managers book them and then I am told when and where to go. I have been fortunate to have the same manager for the last 20 years.

Not at all, my father is a dentist, and my mother is and educator and nurse. Both were missionaries in India previously.

In Ontario and Alberta in December, 2011.

I am putting out 2 records this spring, one house record done while I was in chemo and the other is the acoustic record. I will go and perform to support the records.

Used to be Halifax at the Marquee, now it is Vancouver.

I would love to perform a music festival in China or Singapore.

Who are your favourite musicians to collaborate with?

Will Blunderfield – Yoga Instructor/ Musician – he is on twitter @wblunderfield

I would like to collaborate with rappers, jazz singers and metal.

How many Tattoos do you have?

I kept getting married and could not say no, I got these two tattoos that say NO, got them 15 years ago.

When did you go Vegan?

I went Vegan in my early 20’s while on the road touring with my 1st husband who was vegetarian. I never ate pasta anyways and thought this was the best way to go healthwise. I can eat anything from bananas to papayas to blueberries.

Tell me about your experience with Chemotherapy and eating.

At the beginning of my Chemotherapy I had a craving for yam rolls and ate 36 rolls in one sitting. Nutripinia causes a phase of being psycho hungry, after Chemo I went back to my usual food routine of a RAW diet.

What is your view on eating a RAW diet?

There are lots of rules around what is and isn’t raw, now I am more relaxed about how the foods are prepared or eaten than I was before.

How did you get into Motivational Speaking?

I joined the National Speakers Bureau 2 years ago to talk.