For my third brunch in this series, I was joined by Actor, Musician & Director, Mackenzie Gray at Market by Jean-Georges in Vancouver! 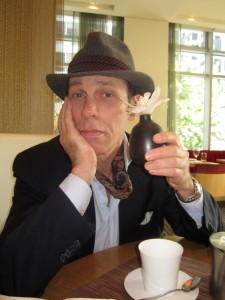 Mackenzie Gray is a Canadian film, television, and stage actor. A professional actor for over 30 years, he has worked on stage numerous times in Britain, Canada and the United States. He has also appeared in over 130 films and television shows and was a series lead on a major US network. Gray has also done voiceover work for animated series, documentaries and video games. In addition to performing, Gray is a director, writer and producer in film and theatre. He wrote vignettes and “shorts” for several episodes of “Sesame Street” from 1984 to 1986.

Gray also has a musical background. He was the lead singer and rhythm guitarist of the Toronto rock band The Fridge Stickers. Mackenzie has composed and recorded many songs, incidental music and scores for films, TV shows and web features. In 2008, he co-produced the award winning feature film Poe: Last Days of The Raven. He taught Film History at The Art Institute of Vancouver for 5 years and teaches Acting for Film at The University of British Columbia.

Mackenzie has worked on stage in Canada, Britain and in the United States in hundreds of plays, musicals and cabarets. He was most recently seen onstage as Steve in the Pulitzer Prize-winning August: Osage County at The Stanley Theatre in Vancouver, and as the “Foreman” in the Snickers commercial featured during SuperBowl XLV.  In addition, he played several roles in the Tom Waits/William S. Burroughs award-winning hit rock opera The Black Rider, in Toronto and Vancouver.

I met Mackenzie last year through friends, he recently joined me for a wonderful brunch at Market by Jean-Georges in the Shangri-La Hotel Vancouver

Sitting in cafes having cups of tea and watching people go by while reading the newspapers. I also play guitar with a band “rekkerz” for fun at Wreck Beach in the summer. 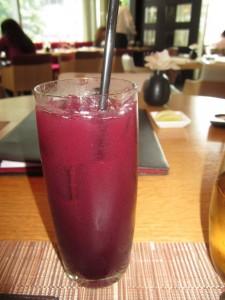 Mackenzie had a Cranberry & Soda and Richard had a Blueberry Soda.

Yes, at 5 years old my parents played me “Camelot” and I always wanted to recite. I performed plays throughout school. In high school I formed my own theatre group –writing my own material, doing plays in Toronto (Jarvis collegiate), creative friends who are musicians (also went to art school in my teens), after high school I went straight to London moving there at 18.

All of my heroes were British Actors and I loved London. That is where I went to get trained in those days. I did Theatre first and acted on stage for 4 years.

I went back to Toronto to the U of T for 4 years and trained as an actor, designer and director. I Graduated in 1983 and landed a role in “Summer Folk” the biggest show in Toronto. From Toronto I was doing theatre, film and television.

Then I did an audition film for a production in Vancouver, the whole process was crazy, but the agents in Vancouver loved it and they booked me for 13 episodes to start, playing Greg Harney the hitman. 1st class ticket to Vancouver, $5,000 signing balance, $17,500 per week.

The Net (based on Sandra Bullock) that`s what brought him to Vancouver. He was set up with a Vancouver agent sharing him with his Toronto agent. 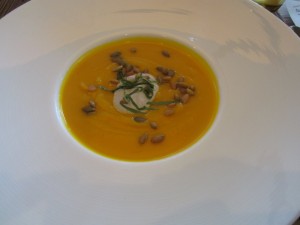 Mackenzie and Richard both had the delicious Butternut Squash Soup, Ginger and Pumpkin Seed. 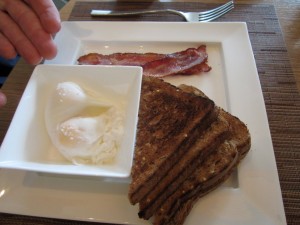 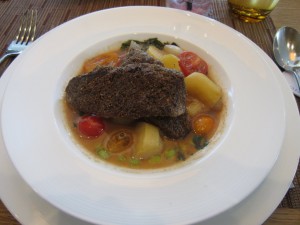 Snapper with Nut and Seed Crust

Mackenzie had the Poached Eggs, Bacon & Toast with no potatoes and Richard had the Snapper with Nut and Seed Crust, Sweet and Sour Broth.

Funding and focus and audience 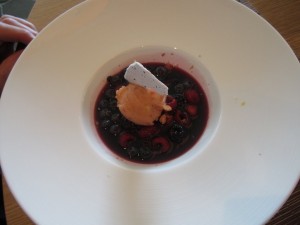 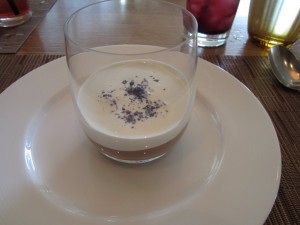 Mackenzie had the Berries in Sangria and Richard had the Chocolate Pudding.

Any advice for local actors?

I am also producing and directing and re-writing a play called “Math our Loud” which will be shown in schools on a tour. The characters are in a dream, are confused about math, guided by a wizard of odds.

If you were offered a play in NY or London would you do it?

Yes in a heartbeat.

What are your favourite restaurants in that past that are no longer?

Style: A La Carte or Brunch Prix Fixe for $35 (Choice of two plates and a dessert)