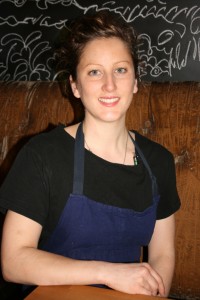 I spent the afternoon with Chef Jane Cornborough at Refuel Restaurant talking about her love for food, onions in everything, art and surfing.

Jane went to culinary school in 2004 at Malaspina in Nanaimo. Then worked at Mission Hill Winery at the restaurant as Chef de Partie for a season in 2005. Then moved on to work at C Restaurant for 2 years, then moved to NY and waitressed while doing a few stages at Aquafit for 1-and half years, then came back to Vancouver for 6 months for her work visa. Rob Belcham hired her at Campagnolo for 3 months, got her working visa and headed back to NY and worked for Daniel Boulud as Chef de Partie for 8 months. Then Rob Belcham called again and she took the job returning to Vancouver to become the Sous Chef at Fuel which then became Refuel and in 2011 was promoted to Chef de Cuisine at Refuel.

Is your style different than the previous chef at Refuel?

My style is lighter, so I have been adding salads and veggies.

I always worked front of the house, I had an idea to go to culinary school.

What were your interests in high school? 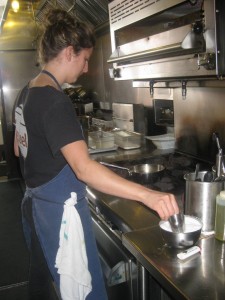 How did you develop your eating style?

When I worked at C Restaurant, I saw multiple course tasting menus and really enjoyed the experience. I think this is a fun way to eat, I like to have multiple dishes in front of me when out in a restaurant. 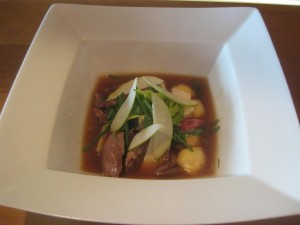 Spring, how I want to eat, lots of vegetables, freshness of the salad

How do you make Ricotta Gnudi?

2% milk and homo milk, bring to a boil at 90 C with lemon juice and then hang it to dry overnight then roll in semolina. 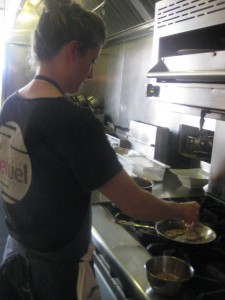 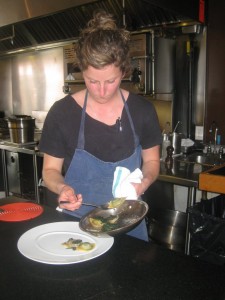 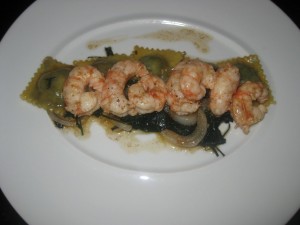 In ravioli – nettles and crème fraiche

Spring time and using nettles from the Fraser Valley, these are around once a year, reminds me of this time of the year and it tastes like spring.

In your current chef role what are you responsible for?

All the dishes and all the desserts

What do you like to do on your time off?

While working in NY, what did you learn?

I like to be in a smaller restaurant as their restaurants are too big, French cooking and Swedish cooking.

Dessert-wise what is your childhood memory?

Creating crisps like apples and rhubarb with my mom

Summer Menu Tasting at The Apron