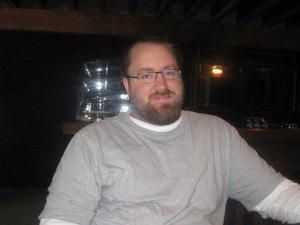 I recently spent the afternoon with Chef Robert Belcham at Campagnolo Restaurant talking about his love for food,  pigs and more.

Born and raised in Edmonton and Peace River, Alberta, while growing up his mom was a terrible cook but she loved to bake. Rob used to watch Julia Child and other chefs on PBS. After watching Cajun Chef Justin Wilson, Rob got hooked on it and cooked all through his teens. Rob moved to Victoria in 1992 and then decided to take cooking at Camosun College and loved it. He worked his way up the ladder and has always learned something new. He did 4 months of school then did another 4 months of school. Rob got his first cooking job in Rebar, a vegetarian restaurant in Victoria. Then worked at the Aerie Resort on the island as a Commi to Sous Chef. He then got a job at the French Laundry in California (his wife was from California) he first staged there for a few weeks, he talked to Thomas Keller a lot and was then asked to take on a job as their butcher and a month later he was butchering for a year. This is where Rob learned the art of butchery, he talked to farmers and learned a lot about fine dining. He then became a private chef, moved to San Mateo and worked for vc people and dot com guys for 2 years. He then decided to come back to Canada and settle in Vancouver and his first child, that was in 2002. He then got his first job in Vancouver at C Restaurant as the Sous Chef and was soon promoted to Chef de Cuisine. He met Tom Dougherty while working at C Restaurant they then decided to become business partners and open their own restaurant. Tom who handles the front of the house and sommelier duties and Rob in the kitchen opened Fuel in 2006. Then they opened Campagnolo in 2008, then Fuel changed to Refuel in 2010, in 2011 they opened the Campagnolo Café as well as Campagnolo Roma.

After Fuel why did you open an Italian Restaurant?

We are not Italian, but we saw the farmers bringing food, we wanted to find a cuisine that we could do this and go. We chose Italian and hired Chef Alvin Pillay away from NU and sent him travelling to Italy to learn food, he came back and we built our menu around Alvin’s dishes.

Why did you open a Café?

We own the building and had some empty space upstairs, also many of our regular customers needed a place to wait before dining at Campagnolo.

Why did you open a Macaron cart in the Oakridge Centre mall?

We thought it would be a good idea because of the huge Asian population in Vancouver, we thought just like in Asia that we could sell a high volume of our Macarons, we thought wrong this did not work. We closed the cart and moved the operation to Campagnolo. 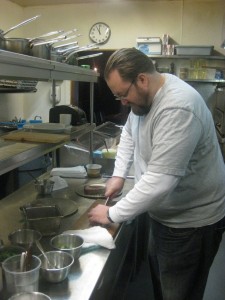 Why Pigs? I mean why has their always been so much pork on your menus?

For me I wanted to make use of as much of the animal I could in my cooking, but I did not like the fact that most would buy factory farmed pigs, so I set out to find as local of a supplier as I could that was not factory farmed. Eight years ago I found Sloping Hills in Qualicum Beach and they have been our supplier ever since. 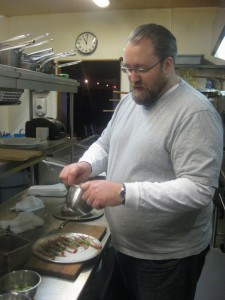 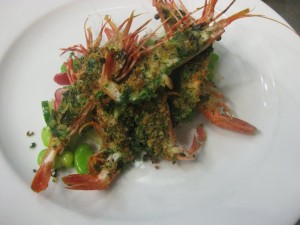 Saw the ingredients come in yesterday and just made it.

How did you come up with your prawn boil that you host at Refuel?

It is done every day in Indiana, so the inspiration came from there, they do a crawfish boil, we decided to do a spot prawn boil.

My wife cooks at home or I do it together with my family. 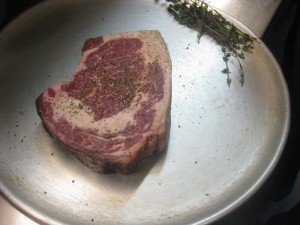 Anything cooked with intergrity and heart, I will eat it.

What’s the coolest menu you have created for a customer?

I made a 30 course tasting menu for Joseph Mallozzi (Stargate) as his last meal before he moved to Toronto. 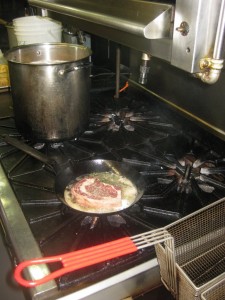 Describe your fascination with pigs

There is no other animal out there that could be used for all things culinary. We buy pork from the farm, that is why we do whole butchery and that is why there is so much pork on all our restaurant menus.

What are your least favourite foods? 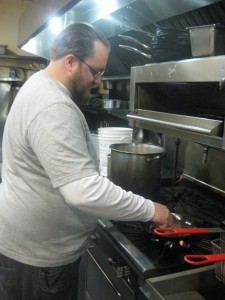 What do you want chefs to learn from you?

How to be a chef – I want to be an educator. 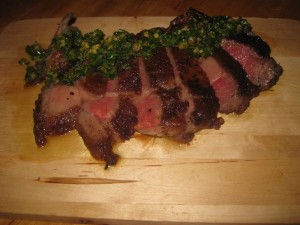 The meat –the best meat and creating the best steak that is dry aged.

Who are your mentors in this industry?

What’s next for you?

Continue the Campagnolo brand and open more of them. I would like to open a small fine dining restaurant one day somewhere as well.

What is your Favourite food city around the world?

What is your Favourite food city in North America?

What is your Favourite dessert to eat?