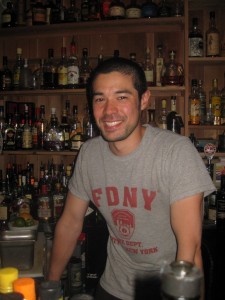 Jason Browne is a Bartender at Calabash Bistro in Vancouver, where he has been mixing drinks for the restaurant since they opened in 2010. He was previously a Bartender at the Revel Room and prior to that he worked as a Bartender in England.

What drew you to bartending?

I was at school going to pursue Marine Biology, and after turning 18 I decided that bartending was more of an interest and then worked in a variety of spots in Redding, England.

Finding a name to build a cocktail around it or have a product you want to use and build around it. Ask people a series of questions (flavours etc) to create something unique and different, refined (education).

Started off in a hotel bar pouring beer and wine, then to Café Paris (restaurant chain) where they did a selection of basic cocktails in 1999, then to TGIF Fridays and worked there for 3 years leaving as head bartender and yes they trained me along the way.

Tell our readers where you have worked in the past 10 years?

In 2003 I worked for Tristan Ramsey opening a restaurant outside of London –they researched and learned the types of drinks and were inventive. I opened a bar in Winchester and worked there for 5 years (that year we won best bar in London).

Ron Frith back in England

Tell us about Calabash Bistro, what type of drinks do you showcase?

Small cocktail list of 7 drinks on the menu, cocktails not to labour intentsive. Rum based focus spin on classics.

On a hot day – Hemingway Daiquri

Something outdoors, in the caribbean, diving, doing environmental stuff and probably drinking a lot of rum.

Explain your selection of Rum at Calabash Bistro

I picked all the rums, all authentic Caribbean rums and also India, South American and Pan American. There are so many different styles of rum, lighter to heavy brown, basically there are 9 different categories from 1) Barbados rum 2) Jamaican rum 3) French rum (agricole) 4) Demorera rums (Guiana) 5) Cuban rum 6) South American rum and then sub categories from within south America 7) Silver 8) Gold and 9) Spice rum)