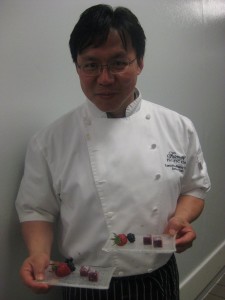 Arthur trained at the Sheraton in Shanghai for 6 months as a pastry artist, then opened the Sheraton in Tianjin as the pastry chef. He then moved to the USA to work as a chef/hospitality at Walt Disney World in Florida for 2 years. Then moved to Vancouver worked at the Fairmont Waterfront for awhile then worked at the Pan Pacific Vancouver for 10 years from 1998-2008. He then worked to open the Delta Burnaby Hotel in 2009 and then worked to open the Fairmont Pacific Rim in 2010 and where he is currently. While working he had been competing in a variety of pastry competitions over the years winning many gold medals. Some of the competitions that he has participated in were:  Pastry Coach of Culinary Team Canada 2008; Pastry Chef of Culinary Team Canada 2005-2007; Pastry Chef of Culinary Team British Columbia, 2004; Pastry Team Canada 2002 WPTC, Las Vegas; and Pastry Artist of Culinary Team British Columbia, 2000.

I have my own creativity to create cakes and desserts in house. 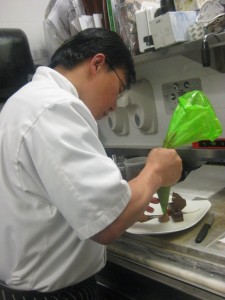 I get a lot of ideas from the competitions that I have competed in, flavour ideas and ingredients with some from Asia since this hotel has a large Asian clientele. 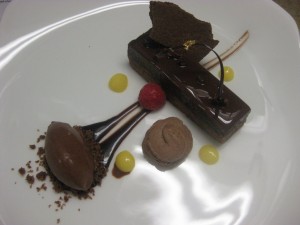 Chef David Wong’s idea to put all the chocolate ingredients together—its been popular since day 1 and is still on the ORU dessert menu.

Ted Hara – was a pastry chef at the Pan Pacific Hotel, now a teacher at Pacific Institute of Culinary Arts. I worked for him for 10 years from the cooking side to personal leader in competitions. 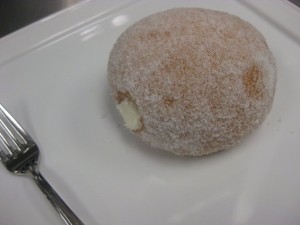 This was created by one of our bakers in the hotel, but its an American idea with a little Italian thrown in.

How would you describe your style of pastries at ORU? And at Giovane?

In ORU it is Pan Asian ingredients in a more North American style.

In Giovane it is more Italian style, Americana coffee shop. Everything is huge, we have created our own ‘signature’ cakes (Martha Stewart style). 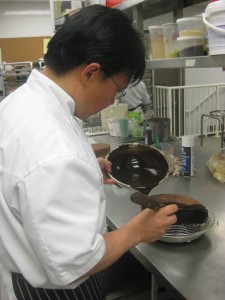 It was a Raspberry, flourless sponge for a Persian wedding at the Delta Burnaby Hotel for 400 people – it was gluten free and dairy free. First I created a cake in 4 tiers that was a cake with only one corner to slice for the bride & groom. Then I made a slab cake to cut for all the guests. A year later the same lady tracked me down here at the Fairmont and ordered the same cake for her 1st year anniversary. 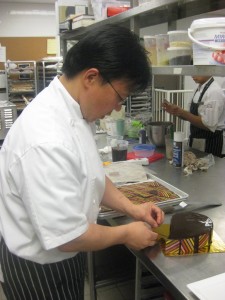 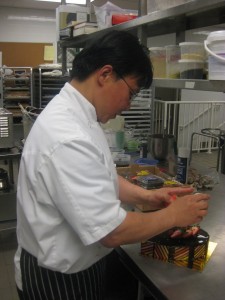 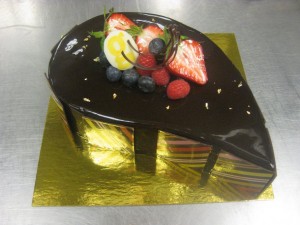 I created this cake which I used for one of my competitions in Germany in 2004. I wanted to do a different shape to make it interesting.

8 people in the pastry kitchen – out of that 4-1/2 people are doing Giovane from bread to cookies to biscotti and sugar buns; and the rest are doing the banquets, in room dining, desserts, restaurant and afternoon tea.