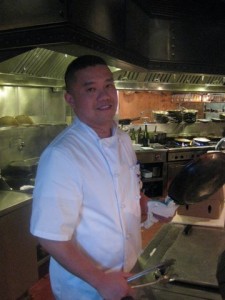 I spent the afternoon recently with Executive Chef William Tse at The Sandbar on Granville Island. William and I have known each other since he last worked at Goldfish Pacific Kitchen. On this visit he cooked up a few of his signature dishes for me to taste, cooking with William provided the perfect setting to dish with him and talk about his cooking, life and passion. 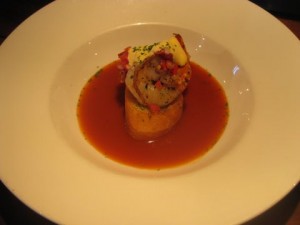 What was your Inspiration to create this dish?

He always fused everything he cooked, unique, different and not a full soup. The bread in this dish is a take-off from a French onion soup, he cooks from his heart. This dish is perfect as a Spring dish either with a hot or a cold broth. 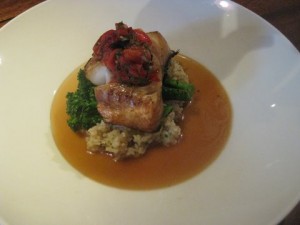 Soy Ginger Marinated Sablefish – with blistered tomato and basil ragout on top of a jasmine rice pilaf and finished with star anise broth.

How do you create a dish?

His creativity comes spur of the moment, when he is driving or spontaneous on the fly, not usually from a cookbook. William likes to cook on the fly, he likes a challenge such as putting two items together. He always looks at the Ying & Yang of life, the sweet and sour. One thing that he stressed, it is all about how you pull the flavours together. 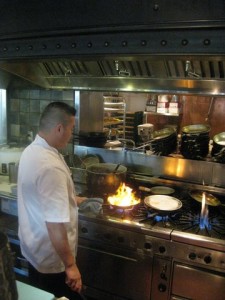 What would surprise me?

William puts soy sauce into his Bolognaise –ok that surprised me. 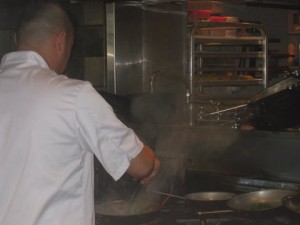 Where are your roots in cooking?

He has done a lot of time cooking European but his roots are in Asian food.

What drives you from waking up in the morning?

He wants to be at the top of his game. Being a chef is fantastic running a restaurant, but he wants his name to stand out in the city, people should know that William Tse is the Executive Chef at The Sandbar. 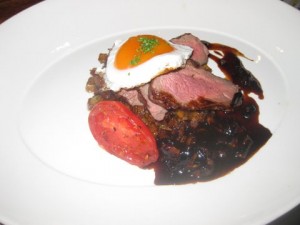 What is the inspiration behind your version of Steak & Eggs?

Once on a trip to Hawaii, he saw the Loco Moco served (popular breakfast dish there), his version is very different in presentation but it hits the spot as did the one he had in Hawaii.

What inspired you to cook breakfast items?

He has never eaten breakfast himself other than Dim Sum, someone asked him to create a dish with meat and thereby his version of Steak and Eggs was born!

What are your thoughts on cooking with butter?

He doesn’t use much butter personally in his cooking. He only uses it to finish a sauce, he usually uses canola or olive oil.

If you had an opportunity to do a different style of cooking what would you do?

Taking the existing menu and redefining it with his own personality.

Have you always wanted to be a chef?

No. He went to BCIT and studied Marketing & Advertising first, then he worked for his Aunt cooking in her restaurant, his mom then bought a restaurant where he worked briefly, he enjoyed cooking so he went to cooking school and then graduated and worked in a variety of hotels from the Delta Hotel Resort for 8 years then to the Delta Airport and then to the Ramada in Richmond, he also worked at the Vancouver Airport Marriott. We all know how important connections are, well one of his longtime friends offered him an opportunity he couldn’t refuse and he took over as the Executive Sous Chef at Joe Fortes Seafood & Chop House where he worked for 3 years before taking over as the Executive Chef of sister restaurant Goldfish Pacific Kitchen for 3-1/2 years and recently joining The Sandbar as their Executive Chef.

What is your view on underground restaurants?

He loves it, the more the merrier.

What is your favourite type of Asian cuisine when you are dining out?

He loves all of them, especially Chinese and Japanese.

Dishing with the Chefs
Chef William Tse Interview The Sandbar

Contest: Win a copy of `From The Olive Grove`