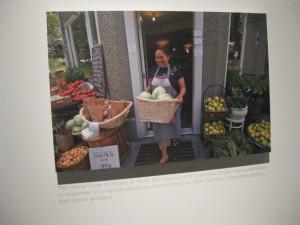 I wandered through the exhibit this morning to have a look through this exciting exhibit that runs from August 26th, 2010 through January 2, 2011 at the Museum of Vancouver (MOV) where they have partnered with FarmFolkCityFolk to explore Vancouver’s passion for backyard farming and local food. The large-scale photographic exhibit captures the current momentum behind local food production and urban agriculture. The exhibit Home Grown: Local Sustainable Food, is a visual feast of 39 Brian Harris photographs set across four seasons. 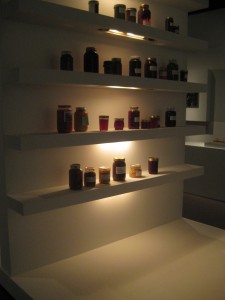 Something unique that caught my eye was the Communal Wall of Preserves which will grow with public participation, as MOV hopes patrons will donate jars of home-preserved fruits and vegetables. Jars of all shapes with a maximum height of 11inches or 28cm can be dropped off at the Museum’s front desk. Cory who is one of the owners of local restaurant Twisted Fork has been making preserves for years and he has donated many jars of all sorts of his preserves to start this Communal Preserves Project at MOV. 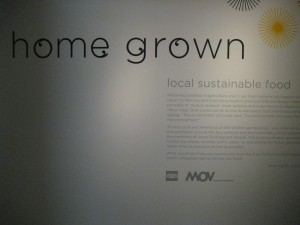 “This series of photos is dedicated to those who see the beauty in small scale sustainable farming. Urban agriculture is about how we relate to the physical world and strive to develop a deeper connection to our food. The industrial world doesn’t seem to want people to know how their food is being produced,” says featured photojournalist, Brian Harris. 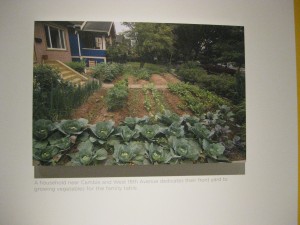 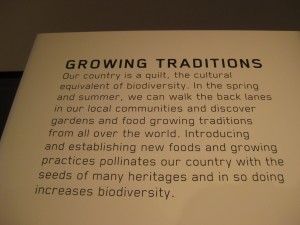 Harris’ images take MOV visitors to the city’s rooftops where a beekeeper tentatively lifts a tray of bees from a hive atop of the Vancouver Convention Centre’s living grassland roof.

“The living roof is 20 acres of grassland – it’s like a prairie up there – smack bang in the middle of a city, a powerful juxtaposition to the cityscape behind it,” remarks Harris.

MOV will host a series of food-based events throughout the fall, a Food and Beers speaker series, Family Workshops, and Talks and Tours.  Watch the museum’s website at www.museumofvancouver.ca for details and dates.