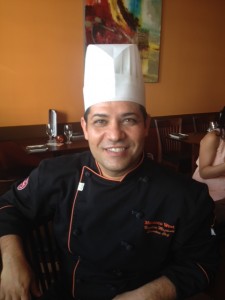 Growing  up  in  southern  Morocco’s  coastal  tourist  town  of  Agadir,   Executive  Chef  Nourdine  Majdoubi  first  developed  a  curiosity  for   international  cuisine  on  his  home  turf.   His  mother’s  kitchen  provided  the  smells  of  daily  fresh  bread  and  the  scent   of  cumin  and  coriander,  staples  in  nightly  fish  tagines  or  lamb  dishes.  And   the  traditional Friday  evening  couscous  stood  him  in  good  stead  when  he   worked  in  an  Algerian  restaurant  in  Paris,  recalling  childhood  memories  of   the  souks  where  olive  oil  from  his  family’s  country  house  found  no  rival.

Coming  to  Vancouver  after  experience  in  French  restaurants,  Chef   Majdoubi  first  mastered  English  and  then  attended  The  Dubrulle  French   Culinary  School  (now  amalgamated  with  The  International  Culinary School   of  The  Art  Institute  of  Vancouver),  doing  his  externship  at  the  Pan  Pacific   Hotel’s  famed  Four  Sails  Restaurant.  On  graduating,  he  worked  at  the  prestigious  Vancouver  Club  and  then  at  Hotel  Le  Soleil.  He  went  on  to  work  at  Feenie’s  and  the  internationally  celebrated   Lumière,  under Top  Chef  Rob  Feenie  and  Chef  Yasmin,  and  topped  up  his   West  Coast  cuisine  skills  under  Executive  Chef  Mario  Fortin  at  Aqua  Riva.   Chef  Majdoubi  then  expanded  his  repertoire  in  international  cuisine  with  a   return  to  Europe  and  a  two  years  stint  in  England,  working  at  The  Orange   in  London’s  posh  Belgravia  district. 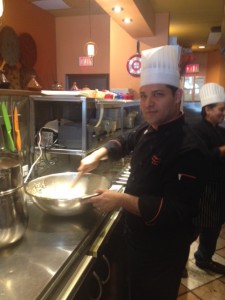 It was one of my dreams a teenager. I discovered that it was what I enjoyed and I took it from there. 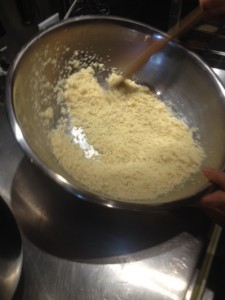 What is the Culinary scene like where you grew up in Morocco?

My uncle was a famous chef who worked for 3 hotels running all their operations. My brother is a pastry chef in Morocco. Growing up with these two people in my life, I was inspired to work in this industry. I was fortunate to have summer jobs working in various hotels because of my uncle.

Did you go to Culinary school? 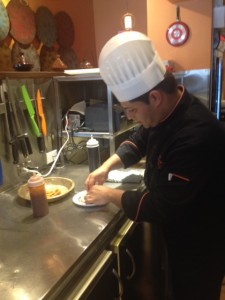 When you went to Dubrulle International Culinary Arts, did you have an interest in opening a Moroccan restaurant then or how did that develop?

I wanted to study Asian cuisine to add to my French cuisine training. The program was all encompassing and offered everything. When I worked at the Fairmont I thought of opening a Moroccan restaurant. Fast forward after working at Ten Ten Tapas I had met Kevin Lin who was also on staff, we hit it off and then opened Morocco West together to focus on Moroccan cuisine in a westcoast style. 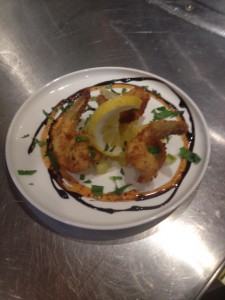 It is light, fresh, and healthy, use coconut. This dish is not Moroccan, it is westcoast. 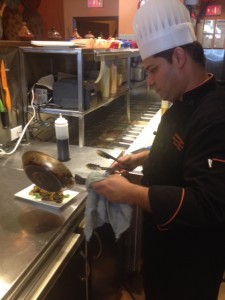 At your restaurant Morocco West, what type of dishes do you feature?

Our Moroccan cuisine is focussed on another level, for example a Moroccan traditional bread (Baghrir) created the dish more of a fusion style mixing in westcoast.

What Challenges you as a Chef in Vancouver?

There are so many cuisines in Vancouver, and I would love to work with them all. I love all the different cultures, the challenge is to find my needs which is why I always go to fusion. 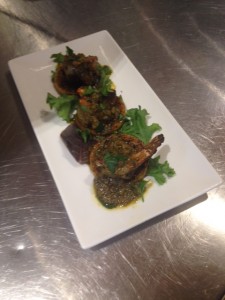 Traditional Moroccan sauce made with prawns. It is light but it has the kick of Charmula spice.

You can’t buy certain ones here so I make my own and that works. 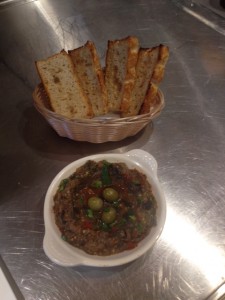 -baked in house and we make different breads daily. 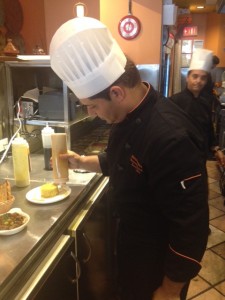 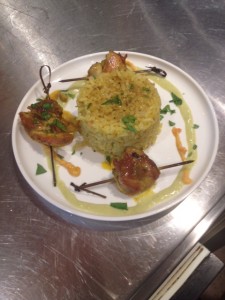 Mediterranean  non traditional kebab, cooked (braised) with our bastilla sauce, I then bake it and add it to the coulis. 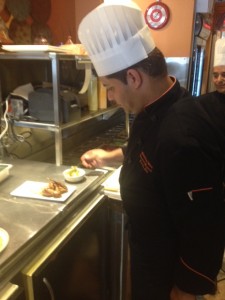 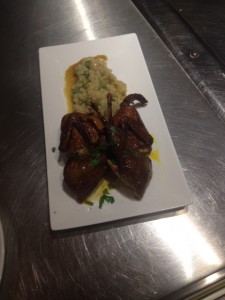 We eat this dish a lot in Morocco but I added an Italian style component the risotto. 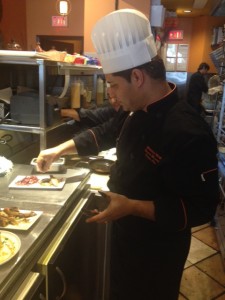 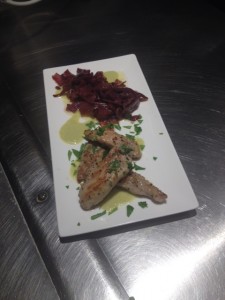 In Morocco we eat a lot of Rabbit. The braised red cabbage I learned how to make it like this while working in England and I added this to the dish.