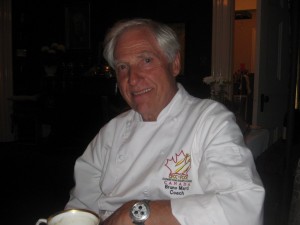 I recently had the opportunity to visit with Chef Bruno Marti at his restaurant La Belle Auberge, over a glass of wine and some delicious food we talked, shared stories and some laughs. As many chefs have told me Chef Bruno Marti is the godfather of Canadian chefs he has mentored so many of this countries chefs as well as many chefs that work around the world today. He is passionate about cooking, leadership, educating chefs and his customers palates.

Bruno Marti began his career in Switzerland before moving to Canada, where he was employed by the Queen Elizabeth Hotel in Montreal, later as Executive Chef for Cara, then as manager of catering for CP Air, and 31 years ago, as chef-owner of La Belle Auberge in Ladner. His first international competition experience came as team captain of the Western Canadian Team in 1976. In 1984, he was on the Canadian team that won the Culinary Olympics in Frankfurt, beating 32 other teams from around the world. He was manager of Team Canada at the 1996 Olympics – winners of three gold and one bronze medals. He was president of the Canadian Culinary Federation and Chair of the BC Culinary Arts Foundation. Bruno Marti has won every award there is to win.

Food that is cooked with love – doesn’t matter what cuisine it is – I am partial to liking French and Japanese first and foremost.

To make people happy, educate people, push young chefs like Tobias Macdonald, Hamid Saliman, Jennifer Peters and Poyan Danesh. Three years ago I received the Order of BC and recently the Americans inducted me into their Hall of Fame to join the ranks of Chefs Trotter and Keller. Achievements like this are what challenges me as a chef.

Love your food, and you have to think that one individual would have the food in front of them.

Every chef is a competitor whether they like it or not. Yes competitions belongs to every chef. Every time you compete you learn from other chefs. I recommend that everyone does it, you will get a better job after competing.

Team BC for example, each member spends 5-6 hours competing every 2 weeks, the for the next 6 months 5 hours a week until October.

Been a member since 1964, in 1976 I was chosen as the captain for the Western Olympic Team, in 1984 we won gold. Founded Team BC in 1980, created Culinary Arts Federation, coached for 25 years, President for 4 years and Chairman for the past 2 years.

Everything that I love – the best food, vegetables, nutrients, it’s for our well-being.

To Lyon, France for the Bocuse d’or previously was to Luxembourg where the Canadian team placed 15th in the world.

Tell me about your motor bike?

Well, I don’t only have one motor bike I have a few different motor bikes for different types of days. One for a day (750 Shadow), on a day off work, I ride my (Daytona) or the (1200 Yamaha). I have rode motor cycles all my life, it is also my escape.

Asides from your motor bike, what other escapes do you enjoy?

I have a 3-1/2 acre farm at home where I have animals such as chickens and other livestock; I also have some telescopes as I like to stargaze, sometimes I go to my cabin on the Sunshine Coast or I go out and patronize other restaurants.

What has it been like to lead culinary teams in many international competitions?

Canada is kind of the stepping grounds, competing internationally and representing your country is a very different experience.

What is the chefs honour society?

I established the society 2 years ago to recognize the top chefs across Canada for their achievements in the culinary world. Twenty one chefs are to be inducted into the honour society at the 2011 chefs convention.

Describe the judging process in the Bocuse d’or

I have judged this competition twice and have been involved for the past 20 years. The plates have to look the best, looks account for 70% of the marks and 30% by taste (but that’s not what they tell you). Many cooks have a big ego and that shows in the plates.

What do you want the outcome of the 2011 Chefs Convention to be?

I am hoping to have a great youth team representation that talks about education, competitions and comradery.