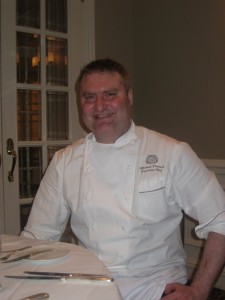 I recently spent the afternoon with Chef Michael Deutsch at Fleuri Restaurant in the Sutton Place Hotel talking about his love for food,  molecular gastronomy and more.

Born in British Columbia, Michael washed dishes at Basiles from 1985-1988, then cooked at the Bimini Pub until 1990. Michael then attended and graduated from Vancouver’s Dubrulle French Culinary School. Upon graduation in 1992, Michael worked at Café de Paris for 2 years, then at Pappis Restaurant from 1994-97, he then joined The Sutton Place Hotel in 1997 as Chef de Partie. Michael was promoted to the position of Chef du Cuisine in 2000 and was with the Sutton Place Hotel through 2005. Shortly thereafter, Michael expanded his career internationally by being selected and sponsored by Moët & Chandon to work in several Michelin star restaurants and hotels in the Champagne region of France. Continuing his overseas adventure, he then moved onto the Hotel Le Sirenuse in Positano, Italy, and from there to the Five Star Landis Hotel in Taipei, Taiwan, where he held the position of Western Executive Chef. He returned to Canada in 2008 and worked as the Executive Chef of the Hilton Whistler Resort & Spa before rejoining the Sutton Place Hotel Vancouver in 2010 as their Executive Chef.

Coming back to the Sutton Place Hotel in your new role as Executive Chef, how did you want it to be?

I wanted to bring back the prestige Sutton previously had, sustainable philosophy. It took some time but the restaurant and banquets are now Ocean Wise and that was a necessary step, I wanted to cook artistic and clean food and I am trying to improve sourcing product from local farms.

In your Chef role, what food operations do you oversee?

In my role as Executive Chef, I oversee the culinary operations of the 591-room Sutton Place Hotel. I oversee Fleuri Restaurant (breakfast, lunch, dinner, brunch and chocolate buffet) and Gerard Lounge, the full-service banquet facility, room service, the Boulangerie and their wine dinners. 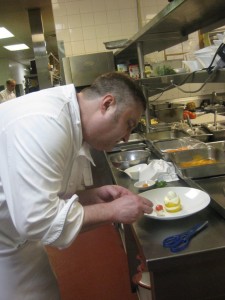 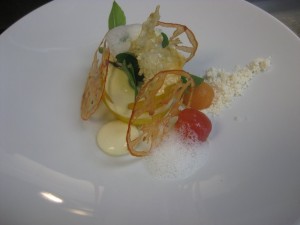 I wanted to make a different type of Tomato Boccioni salad than anyone has ever had before using different types of a tomato from a powder to a foam.

Where have you eaten at lately?

Is it harder for you to be more creative and free in a hotel environment?

In a hotel you are thinking of budgets, hotel occupancy etc

Do you have freedom in your role at the Sutton Place?

I have the freedom to create and play and that is what I love most about being a chef. 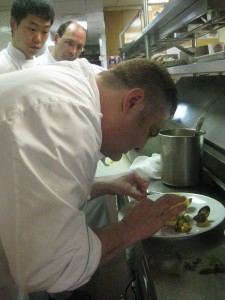 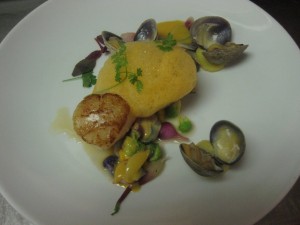 British Columbia using all BC Ingredients and a play on seafood with meat (scallop and bacon) flavours.

I love all cuisines from sushi to comfort food to burgers to wings.

If you could create a menu within your restaurant what would you do?

I would create a Vegan menu, I am not vegan by any means but I think it is a market that is so underserved by restaurants in this city.

Who taught you Molecular Gastronomy?

I am self-trained in molecular cooking and techniques.

Did you want to be in Culinary growing up?

Well I kind of just ended up in the culinary world, fell into it and loved it.  I had a goal to work in 3 places at the time and I was successful in that pursuit. I worked at Café de Paris, then at Pappis and then the Meridean (which later became the Sutton Place). 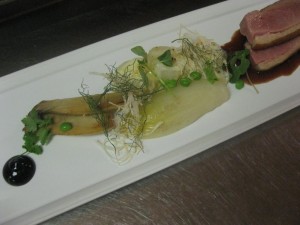 Taking vanilla beans, sour cherries and star anise and incorporating with duck, scalloped potatoes and being able to pair it with any red wine.

Yes I do and I love cooking simple rice dishes, awesome chicken (it is never the same), madras curries, simple pastas with herbs, fresh vegetables etc.

Burgers – I love a good burger.

What was your favourite meal ever?

I had a 20 course tasting menu in Osaka, Japan and it was paired with wine ($200 US for 2 people) with a Japanese chef that was European trained, the restaurant was Fujia 1930 and it was truly amazing. 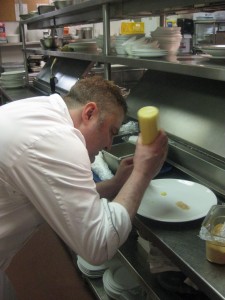 What are your favourite ingredients to play together?

Seafood and I use all of the products from the bones etc to create consommé’s, juices etc 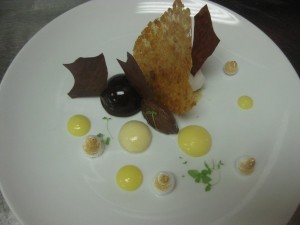 I wanted to have a lemon merengue pie that was nothing like what you thought, I added chocolate just because …..

Tell me about powders

Easiest form of new technique; taking a tapioca maltodextrin starch with a fat that forms itself into a powder. This is an exciting new way of cooking.

Everything on the plate tastes good and it doesn’t matter how simple it is.