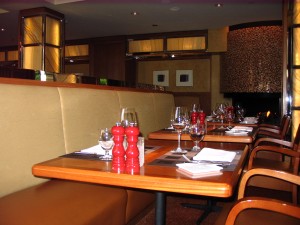 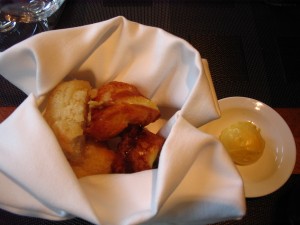 I went on an excursion to Whistler recently and to have dinner at Sidecut, the server brought us the menus and the Somelier served us a complimentary glass of the Blue Mountain Brut to welcome us to their restaurant. Toasting to new friends and connections we then browsed the menu along with the extensive wine list which offers more than 200 bottles of wine and 30 wines by the glass. Although there is a large selection of International varietals on the list, several boutique British Columbia wines are also available. We ordered the starter and eventually the rest of the dishes. A basket arrived to the table with cheese buns which were kind of like mini brioches along with Bannock bread, this was a real treat and one that I enjoyed throughout the meal having the basket refilled a couple of times. 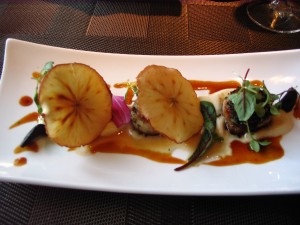 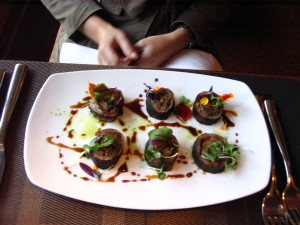 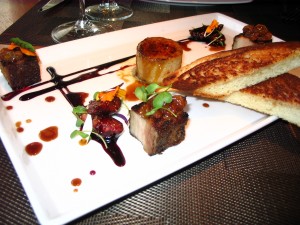 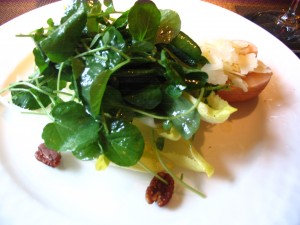 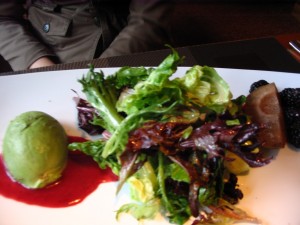 My appetizer arrived, I had the Qualicum Scallops ($12) a beautiful presentation of celiriac, black garlic, and crispy apple chips, my dining companion had the Steakhouse ‘sushi’ Kobe Roll ($32) a dish that was made to look like sushi, this outstanding beef was grilled rare, served with avocado, dried tomato and sweet soy. We were then treated to another appetizer one of their house specialties, it was the Maple Bourbon Cured Fois Gras ($19), the Fois Gras was served in a round in the centre with the grilled house marinated pork belly in squares around, with tasty figs in a solera elixer. After a little break, our salads arrived, I had the Belgian Endive & Watercress ($12) with shaved ‘montana’ cheese, spicy pecans, backed apple, lillooet honey vinaigrette. My friend had the Artisan Lettuces ($11) with roasted pear, half an avocado, and blackberry vinaigrette. 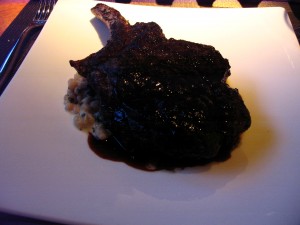 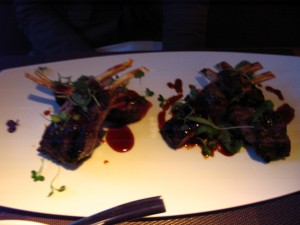 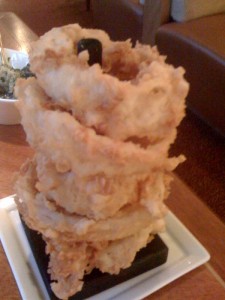 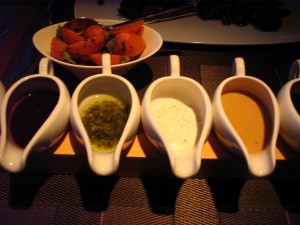 I left the wine selection up to Somelier David Foran to serve me the best matched wine to my Venison and that he did a glass of red, Les Brunnelles Rozes Hermitage 2006 from France. Moving on to the stars of the dining experience, the entrees, I had the Peace River Rack of Venison ($36) made with Chef Edisons Blueberry Hill rub served with truffled white beans, this was an outstandingly flavoured dish and quite large. It was accompanied by their 6 signature sauces of which I enjoyed the Wasabi Mustard and the Mushroom Bordelaise for dipping. My friend had the New Zealand Rack of Lamb ($34) another large dish that was delicious. We ordered along some sides, perhaps we ordered to many, as our eyes took on their own pleasing role. A side of Aged Cheddar & Potato Gratin ($6), Creamed Spinach ($6), Roof Top Carrots ($6) and the Double dipped Onion Rings ($6) stack served, these rings were awesome! I was rather full after this flavorful eating experience, however since dessert is my passion as well as the passion of my dining companion we both thought we must try. Sidecut is a new restaurant having recently opened and their concept is to offer the best meats, poultry and fish. Their beef and game is aged for 40 days and then grilled at 1800 degrees on an infrared grill, they are recognized for their unique spice rubs and rich flavours. All cuts are served a la carte with a selected rub and accompanied by all six sauces. 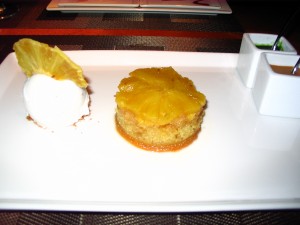 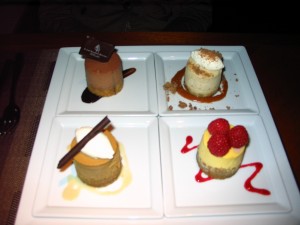 For dessert, I had the signature Pineapple Upside Down Cake ($11) served with Pink Peppercorn Sorbet and a cliantro/lime sauce as well as a caramel sauce. Of course I had to also have a scoop of their popular Maple Bourbon Ice Cream that is made with Makers Mark Bourbon. My friend had the 4 Cheesecakes ($12) served on a platter with 4 mini cheesecakes, I tasted a couple and my favourite was the Skor Cheesecake – Yum! After dinner I finished off with a nightcap, a glass of Penfolds ‘Grandfather’ fine old tawny from Australia while my friend had a Chamomile Tea.
Review by: Richard Wolak
Excursions Restaurant Reviews
Breakfast Desserts Dinner Foodies Four Seasons Whistler Resort Game Hotspot Lunch Seafood Steakhouse Wheelchair Accessible Whistler Wines