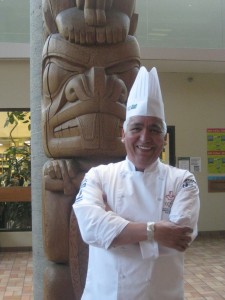 I met up with Ben recently to talk about his passion as a chef, teacher and love for food. Previously I had the pleasure to meet and dine with Ben at one of his Aboriginal Feasts that his company Kanata Cuisine presented during the 2010 Olympics.

A Metis of Cree Nation and French decedents, Ben was born in Russell Manitoba. He moved to the West Coast in 1983 he learned his trade with some of Vancouvers best, Le Crocodile, Picclo Mondo, Bianco Nero and the Mandarin Hotel to name a few. In 1997 Ben found a new passion, working with youth at risk at Picasso Cafe, and has had many rewarding experiences during that time. His greatest passion is what Ben calls “Kanata Cuisine” utilizing Canadian First Nations produce, products and ingredients to prepare traditional foods with contemporary methods and presented with modern flair. He was a Chef Instructor with the Northwest Community College in Terrace, B.C. before joining Vancouver Community College to establish there Aboriginal Culinary Program.

How long have you been involved in Aboriginal Cuisine?

How did you get involved in the Canadian Culinary Federation Convention to do an Aboriginal culinary event during the conference?

They asked me to host an Aboriginal inspired dinner, I wanted to create a Potlatch where people would learn from each of the communities across Canada. We are expecting 400 chefs to attend from across Canada when the conference is held in Vancouver June 12-15, 2011, there will be 6 or 7 tasting stations and each station will have a story behind the dish. My students from the Aboriginal culinary program at Vancouver Community College will be cooking the meal with me.

What is the ultimate goal for the Aboriginal Culinary event?

Appreciating a better understanding of Aboriginal cuisine, and creating awareness.

On the prairies in Russell, Manitoba.

What got you into cooking?

Worked construction for a couple of years, then got a job washing dishes and then well I ended up switching sides of the kitchen ….I was fortunate to have worked and been trained by some of the best European chefs in the city.

Has anyone in your family had an interest in cooking as well?

My mom was an amazing cook, she would go and pick her own vegetables in the yard, and make a meal.

What do you want your students to learn in your class?

All my students have to taste everything, the must have a spoon of every dish they make to understand the tasting, cuisine and why.

Are there any ingredients you can’t get locally?

How do you get the students for your culinary program?

The nations have advertised, now there are non-aboriginal students enquiring about the program.

Are there many Aboriginal culinary programs in Canada?

No, the Aboriginal Culinary Program here at the Vancouver Community College is the only one of its kind in Canada.

Where have your graduates of the Aboriginal Culinary Program been placed?

Is there a restaurant at school that the public can experience Aboriginal cuisine that the students prepare?

Yes, in the summer months from May thru July we welcome diners to our Wild Salmon restaurant that is located in Vancouver Community College campus downtown Vancouver.

Is there a restaurant you are looking forward to dining at soon?

Is there a milestone in your career that you often remember?

I was the first Canadian chef to work at Le Crocodile in 2 years after they opened.

What is on the horizon in the future?

There will be an Aboriginal Culinary Team that I will be taking to Germany to compete in the World Culinary Olympics in 2012. After that I would love to open or run a restaurant in a boutique hotel.

WIN 2 Tickets to New Zealand in a Glass