Celebrate Fish ‘n Chips and attend the European Union Film Fest screening of Fish ‘n Chips on November 28th at Pacific Cinémathèque as well as Fish ‘n Chips dinner for two at the Fish Café to use on any night of your choice (subject to availability). 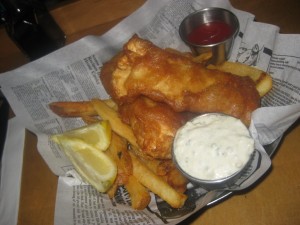 Writer-director Elias Demetriou was born in Cyprus, lives and works in Athens, and holds British, Greek, and Cypriot citizenship; so, in tackling a tale of immigration, identity, and complicated national loyalties, he knows whereof he speaks! Cockney-accented Andy (Marios Ioannou) is a hard-working Cypriot immigrant who has spent his life deep-frying fish n’ chips in a London shop. When he loses his job, Andy decides it’s time to take his Alzheimer’s-afflicted mother, his German girlfriend Karin, and her daughter Emma on a visit back to his homeland. Once in Cyprus, Andy hits upon the brilliant idea of starting his own business — a seaside fish n’ chips joint. But Cyprus is not London, and maybe you can’t go home again, especially if you haven’t yet figured out where home is. Colour, Digibeta video, in English and Greek with English subtitles. 102 mins.

Fish Café is located at 2053 West 41st Avenue in Vancouver. They specialize in Fish ‘n Chips as well as seafood, serving salads, appetizers and more. You will also find beer on tap and other beverage choices. They tied for 1st place in Vancouver Foodster’s BEST Fish & Chips Quest!

Contest ends Thursday November 24th at 10pm. Contest is open to Canadian residents and the winner will be drawn at random. Good luck to everyone that enters!

CONGRATULATIONS ANIKA VERVECKEN Winner of the contest -drawn through random.org